What Is It?
The larch sawfly can be detected by looking for the slits on new shoots in which females have deposited their eggs or checking for groups of larvae crawling on the branches. 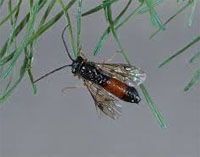 What's the Problem?
Egg-laying in young shoots causes them to dry out and curl, which stops them from growing, reduces the number of buds and eventually results in crown deformation. The main damage is caused by feeding groups of larvae, which defoliate the tree. Moderate defoliation reduces growth and weakens the tree. Larch is deciduous and can withstand defoliation better than most conifers. However, repeated severe infestation over many years may result in a reduction in growth, tip dieback, branch mortality and tree mortality.

Larch sawfly larvae live in colonies (groups) during their initial larval stages and then scatter throughout the crowns of trees. Larvae feed heavily on needle clusters from mid-May to September, stripping the foliage from entire branches. Mature larvae drop to the ground between June and July and spin cocoons in the duff. The larvae overwinter in cocoons and transform into pupae the following spring. A few individuals may diapause for more than a year. When they emerge from the cocoon in the spring, the females lay approximately 75 eggs in small slits along 1 side of an elongating shoot.
What Can I Do?
The larch sawfly is considered the most damaging pest of larch in North America. An outbreak was reported in Alberta in 1996-1999 in the northwestern part of the boreal forest and large tracts of larch were defoliated. Since the 1970s, the larch sawfly has remained at an endemic level in Quebec, except in seed orchards, where populations are more abundant. The species can be controlled on small ornamental trees and isolated trees by shaking infested branches and destroying the larvae that fall to the ground.